Join the Discussion Group! We invite you to share your comments, insights and questions on the History of Physical Culture.

David Gentle wrote:I have to make a confession, despite writing now and then in the various topics, i had never read the Physical Culture and Iron Game Picture Thread, dont know why, just let it slide by. Today was the first look i have taken of it and wow, i didnt realise just how interesting and well illustrated it is. it was really was enjoyable. So my message to me and others, is do take a browse around the site just to see whats on offer, we have so many treasures its hard to appreciate them all, sometimes we dont see what is in front of our eyes, hidden in full view. Thanks for those who contrirbuted , most enjoyable. David Gentle

I really need to post more often in here.
Top

Dear Danny, thank you for all your contributions, you are a great assett to the site and i love reading your comments from a guy who knows what he is talking about, cheers mate. I have just finished my usual couple of articles in advance for the next issue of Health and Strength,( You will find a super photo of Bill Pearl on cover) so can now take time off and catch up on some of the posts i have missed. , David Gentle
David Gentle
Chief Moderator
Author & Historian,
Physical Culture
https://davidgentle.com
Top

Hi David,
glad you found this thread too. There is so much on the site that it is easy to miss things. From time to time i just go back and look at some of the posts from the early days of the forum. So much good information and interesting reading.
Regards,Peter.
Peter Yates
Top

Just been flicking through the threads and have a couple of bit of info. Duranton became a pro wrestler and regularly wrestled with my close mate, wrestler Bob Kirkwood, both were what we call good "workers" although Duranton put a lot of weight on. Indian Clubs, David Webster obe, the famous scottish writer, historian etc,was a champion at swinging Indian clubs and gets mentioned often in old H&S mags, David is 90 years old this year and still pounds out articles, although his greatest love is the Highland Games, with Kazmaier helping him out. Dave Prowse, sadly is not so good and has finished his roving and talks on Star Wars etc, still physically healthy, despite his life long fight with his joint problems, he is not so good in his memory stakes , so finally no longer available for lectures.Please dont pester him for star wars memorabilia. His first love was and is bodybuilding, and the only reason he didnt class higher, and boy, is he high, towering over my 6ft 1in. is or was due to personal politics, ie the people running the shows in those days simply didnt like him as he would not play the rules, so despite a good physique, lost out due to (Honest this is what they said) " Ugly feet"... thats the way it was...David Gentle
David Gentle
Chief Moderator
Author & Historian,
Physical Culture
https://davidgentle.com
Top 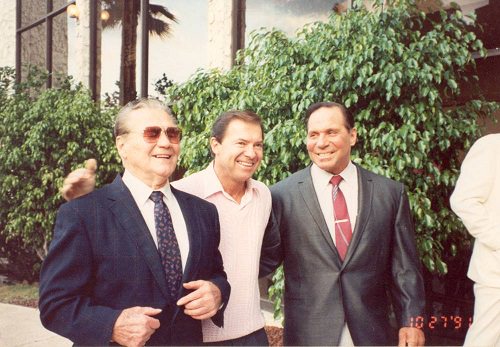 Hey Danny, great classic photo. They all look so good there. Where was this taken, do you know?
Regards,Peter.
Peter Yates
Top

peter yates wrote:Hey Danny, great classic photo. They all look so good there. Where was this taken, do you know?
Regards,Peter.

Sorry, I don't. It was posted on Bill Pearl's Facebook page, but there wasn't any mention of where it was taken.
Top
Post Reply
147 posts